No purchase necessary to enter or win. A purchase will not increase your chances of winning. Void in Quebec and where prohibited by law. Affidavit of eligibility, release of liability, and prize acceptance agreement may be required.

ELIGIBILITY: The SAKURA OF AMERICA 100 Year Anniversary Promotion (“Promotion”) is open to individuals who, as of the date of entry, are legal residents of and residing in the 50 United States, District of Columbia and Canada (except Quebec) and are over 18 years of age (“Participant”). Employees, officers, and directors (including immediate family members and members of the same household of such persons, including common law spouses) of the Sponsor, its participating sponsors, partners, and parent company, affiliated companies or agents, their respective advertising or promotional agencies (collectively, the “Promotion Entities”) are not eligible. Promotion is subject to all federal, state, provincial, and local laws and regulations. Void in Quebec and where prohibited or restricted by law.

HOW TO ENTER: Participants must complete and submit the online Promotion entry form at the SAKURA OF AMERICA 100th Anniversary Promotion page at www.sakuraofamerica.com to enter, including providing your contact information and meeting the qualifications as outlined in the Official Promotion Terms. Only entries submitted and received by the Sponsor during the official Promotion Period are qualified.

Limit one (1) entry per person/e-mail address during Promotion period.

Sponsor reserves the right to substitute prizes if necessary. The specifics of the prize shall be solely determined by Sponsor. No cash or other prize substitution shall be permitted except at Sponsor’s discretion. The prize is non-transferable. Any and all prize-related expenses, including without limitation, any and all federal, state, and/or local taxes, shall be the sole responsibility of the Winner. The Sponsor shall have no liability for Winner’s failure to receive prize due to lost mail, or for Winner’s provision of incorrect mailing address. Limit one (1) prize per person. Prizes will be fulfilled within four to six weeks after the drawing.

WINNER SELECTION & NOTIFICATION: A random drawing will be conducted on or about July 9, 2021. All decisions on matters related to the Promotion are binding and final. Odds of winning depend on number of entries received for the Promotion.

PUBLICITY RELEASE: Acceptance of prize constitutes Winner’s consent that his/her name and likeness may be used by Sponsor for advertising and promotional purposes without limitation and without additional compensation, notice, or consent.

TERMS & CONDITIONS: By participating in this Promotion, each Participant and Winner waives any and all claims of liability against the Promotion Entities and each of its employees and agents, promotion’s sponsors and their respective employees and agents, including any personal injury or loss which may occur from the conduct of, or participation in, the Promotion, or from the use of any prize.

Sponsor reserves the right, in its sole discretion to cancel, terminate, modify or suspend any portion of Promotion should virus, bug, non-authorized human intervention, fraud, or other cause beyond Sponsor’s control, corrupt or affect the administration, security, fairness, or proper conduct of the Promotion. In such case, Sponsor may select the winner from all eligible entries received prior to and/or after (if appropriate) the action taken by Sponsor. Sponsor reserves the right, in its sole discretion, to disqualify any individual who tampers or attempts to tamper with the entry process or the operation of the campaign or website or violates the Promotion Terms and these Terms & Conditions. Sponsor has the right, in its sole discretion, to maintain the integrity of the Promotion, to void entries for any reason, including but not limited to: multiple entries from the same user from different IP addresses; multiple entries from the same computer in excess of that allowed by the Promotion rules; or the use of bots, macros, scripts, or other technical means for entering. Any attempt by an entrant to deliberately damage any website or undermine the legitimate operation of the Promotion may be a violation of criminal and civil laws. Should such attempt be made, Sponsor reserves the right to seek damages to the fullest extent permitted by law.

LIMITATION OF LIABILITY: By entering, Participant agrees to release and hold harmless Sponsor and its subsidiaries, affiliates, advertising and promotion agencies, partners, representatives, agents, successors, assigns, parent company, employees, officers, and directors from any liability, loss, litigation, claim or damage that may occur, directly or indirectly, whether caused by negligence or not, from: (i) such entrant’s participation in the Promotion and/or his/her acceptance, possession, use or misuse of any prize or portion thereof; (ii) technical failures of any kind, including but not limited to the malfunction of any computer, cable, network, hardware or software, or other mechanical equipment; (iii) the unavailability or inaccessibility of any transmissions, telephone or Internet service; (iv) unauthorized human intervention in any part of the entry; and (v) any other reasons related to the Promotion.

DISPUTES: Promotion is governed by the laws of the United States of America and California, without respect to conflict of law doctrines. As a condition of participating in Promotion, Participant agrees that any and all disputes that cannot be resolved between the parties, and causes of action arising out of or connected with the Promotion, shall be resolved individually, without resort to any form of class action, exclusively through arbitration in Alameda County, California. Further, in any such dispute, under no circumstances shall Participant be permitted to obtain awards for, and hereby waives all rights to, punitive, incidental, or consequential damages, including reasonable attorney’s fees, other than participant’s actual out-of-pocket expenses (e.g., costs associated with entering the Promotion). Participant further waives all rights to have damages multiplied or increased.

PRIVACY: Personally identifiable information submitted by Entrants as part of Promotion will be used to conduct the Promotion, select winners, and fulfill prizes. Personal information will be treated in accordance with Sponsor’s Privacy Policy http://www.sakuraofamerica.com/privacy-policy. 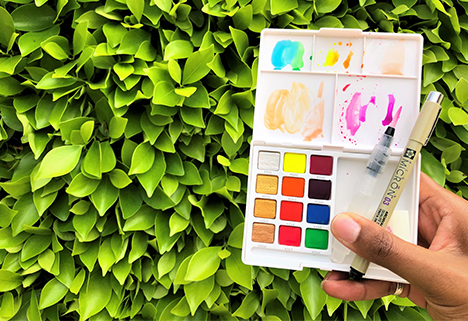 Be the first to find out about new products, exclusive content, and all things Sakura!